This June, our congregation will be voting to affirm the new 8th Principle, which states that we are:

Journeying towards spiritual wholeness by working to build a diverse multicultural Beloved Community by our actions that accountably dismantle racism and other oppressions in ourselves and our institutions.

To learn more about the 8th Principle, check out our special 8th Principle page here, or review this helpful guide from our Board of Trustees!

Email us at racialjustice@4thu.org to learn more about how we are mobilizing for change and to join us in this work.

As a congregation, we condemn in the strongest possible terms the murders of George Floyd, Ahmaud Arbery, Breonna Taylor, and countless others, who have lost their lives to white supremacy.

Our faith tradition calls us to confront and dismantle systems of injustice that allow these acts of violence to continue. We join in solidarity, grief, and anger with all people of color and commit ourselves to the work of real societal change.

Check out some of our recent advocacy, covered here at PIX II News:

Below is a sermon from our Senior Minister, in the wake of the murders of George Floyd, Ahmaud Arbery, Breonna Taylor.

Our congregation has a long history of working for racial justice. 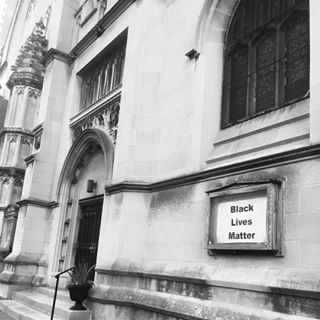 Dating back to our earliest ministers who spoke out against slavery, we do our best to support causes of equality, from school integration to speaking out against police brutality. We wrestle with privilege and systems of white supremacy while seeking to use what power we have to fight discrimination and hate. Our congregation prominently displays a Black Lives Matter banner overlooking Central Park, and yet we know that such symbolic actions are just a beginning.

Our racial justice work is led by our Racial Justice Team, whose ministry has included holding vigils following police shootings, planning solidarity efforts in support of Muslim neighbors, holding worship services confronting white privilege and supremacy, and organizing for the #CloseRikers campaign, including collecting signatures, offering testimony at city hearings, and holding film screenings. Our adult education programming has also recently offered two programs on racial justice, seeking to expand our congregation’s awareness around racial justice issues, and shedding light on the patterns and systems of white supremacy still present even within our own faith community.

This exploration led to the creation of three teams in early 2020, devoted to naming and addressing areas of white supremacy in our congregation and ensuring that our congregation is as anti-racist as possible. The three teams are focused on worship, religious education, and membership/hospitality. We look forward to sharing their findings and suggestions soon!

Additionally, in the spring of 2019, our congregation formed our Person of Color Affinity (POC) Group. Meeting monthly on the third Sunday of the month, the group offers a place of community, support, and conversation for people of color in our congregation. If you are a person of color and are interested in participating, we hope you will join!

If you would like to get involved in these efforts, I invite you to contact our Senior Minister, Rev. Schuyler Vogel, at revschuyler@4thu.org, or our Racial Justice Team, at racialjustice@4thu.org. We look forward to being in touch!