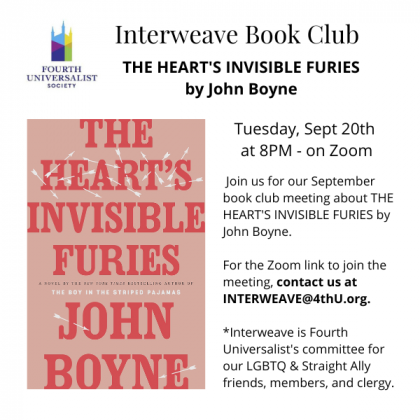 Our September 2022 book is THE HEART’S INVISIBLE FURIES, written by John Boyne, the author of THE BOY IN THE STRIPED PAJAMAS.

Considered by some to be John Boyne’s most transcendent work to date, we’ll read about the history of Ireland from the 1940s to current times through the eyes of an ordinary man in THE HEART’S INVISIBLE FURIES.

Cyril Avery is not a real Avery, which is what his adoptive parents often remind him. But if he’s not a real Avery, then who is he? Born out of wedlock to a teenage girl cast out of her church and family and adopted by an affluent Dublin couple via the intervention of a hunchback nun, Cyril is adrift in the world, anchored only by his friendship with the son of his adoptive father’s tax attorney.

Join us for lively conversation on Tuesday, September 20th at 8:00 p.m. Eastern as we discuss THE HEART’S INVISIBLE FURIES, a novel that will make you laugh and cry while reminding us all of the redemptive power of the human spirit and kindness.

For further information, including the Zoom link to attend, contact us at interweave@4thu.org.⁠
⁠
*INTERWEAVE is Fourth Universalist’s committee for our LGBTQ & Straight Ally friends, members, and clergy.