From Overwhelm to Grounded Action – The Story of Plastic

From Overwhelm to Grounded Action – The Story of Plastic

Event was hosted on January 11th. This page exists as a recording of the event.

Plastics’ ecological, environmental justice and climate impacts are undeniably overwhelming. Together, we remember we are not alone and each of us can do something. Let us ground in community action for a better world! We will begin by watching Emmy Award winning documentary The Story of Plastic, and then we will gather together with special guests Stiv Wilson (Executive Producer; Co-Director of Peak Plastic Foundation), frontline activists Sharon Lavigne and Rev. Harry Joseph Sr. (RISE St James) for an hour of spiritual grounding and community building for climate justice through storytelling, creativity & collective action. 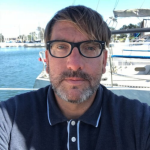 Stiv Wilson (Executive Producer; he/him) is an award winning activist, filmmaker, and educator working on marine conservation, plastic pollution, petrochemical production and human rights. Wilson co-authored a global estimate of the abundance of plastics in five oceans in the peer reviewed journal, PLOS ONE and helped pass national policy, The Plastic Free Waters Act, signed into law by President Obama in 2015. Wilson’s first feature length documentary, THE STORY OF PLASTIC, has earned several awards. Currently he is working with federal lawmakers to use the film to support the first comprehensive national plastics legislation: The Break Free From Plastic Pollution Act. 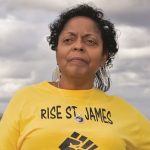 Sharon Lavigne (Founder of RISE St James; she/her) is the recipient of the 2021 Goldman Environmental Prize for North America for her dedication to fighting for environmental justice in her community and in recognition of her leadership with RISE St James, in St James Parish, Louisiana, one of the communities most affected by plastic and petrochemical pollution. In September 2019, Lavigne, a special education teacher turned environmental justice advocate, successfully stopped the construction of a $1.25 billion plastics manufacturing plant proposed for development in St. James Parish. Lavigne mobilized grassroots opposition to the project, educated community members, and organized peaceful protests to defend her predominantly African American community. The plant would have generated one million pounds of liquid hazardous waste annually, in a region already contending with known carcinogens and toxic air pollution. 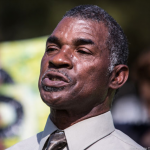 Pastor Harry Joseph Sr. (RISE St James; he/him) is the pastor of the one hundred-fourteen year-old Mount Triumph Baptist Church in St. James Parish, Louisiana. He is a member of RISE St. James: a grassroots, faith-based organization founded to oppose the ongoing operations of the polluting plastics industry in St. James in the 5th District, a predominately African-American community, working to address concerns about harmful health effects and ongoing environmental pollution from plastic production. Pastor Joseph is a leading community advocate for a better future for the people of St. James in the face of the powerful oil and gas industry. Joseph frequently speaks out against plastic pollution and the siting of new petrochemical companies in his community.