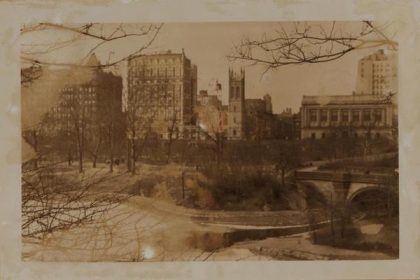 In 1848, we changed our name to the Church of the Divine Paternity and officially returned to the name of Fourth Universalist Society in the City of New York in 1967. Over the years our congregation attracted notable personalities such as P. T. Barnum, Horace Greeley, the Carnegie family, Lou Gehrig, Oscar Hammerstein II, and Barbara Gittings to our pews. In that time, we’ve been fortunate to be served by many wonderful and pioneering ministers, including Thomas Lake Harris, Edwin Hubbell Chapin, Charles Henry Eaton, Frank Oliver Hall, Joseph Fort Newton, Charles Francis Potter and Rosemary Bray McNatt.

Our congregation’s first home was downtown, and over the years we moved steadily northward. In 1898, we built our current home, dubbed at the time “the Cathedral of Universalism,” at West 76th Street and Central Park West on New York City’s Upper West Side. The architect, William Appleton Potter, based the design closely upon Magdalen Tower, Oxford, and buildings at Magdalen College. A rare design in English Perpendicular Gothic, it received praise from notable architects including Frank Lloyd Wright, whose daughter was married at the church. The church houses several significant artistic works, including an altar by Louis Comfort Tiffany, a bronze relief sculpture by Augustus Saint-Gaudens, a mosaic by R. H. Robertson, and stained glass windows by Clayton and Bell of London. The organ was donated by Andrew Carnegie and his wife, Louise Carnegie, the latter who was a member of the church.[4] Originally designed and constructed by the Hutchings-Votey Organ Company of Boston, the organ was rebuilt and revised by the Ernest M. Skinner Company.

Most recently, in February 2017, our congregation voted unanimously to become a sanctuary congregation to protect undocumented Americans from deportation. Several weeks later, our building was vandalized by swastikas and hate speech. The incident garnered national media attention and has led us to double our efforts in the work of justice.