Where love, justice, and hope meet

Following the leaders
In the ongoing battle for the environment, we must learn to listen to those most affected.

There is an elephant in the room of the mainstream conservation movement. Although things are slowly changing, the so-called “Big Greens,” such as the Sierra Club, the World Wildlife Fund, and 350.org, have historically been mostly white. A changing climate and a polluted environment affect us all, but let us be clear: in America, people of color have had disparate access to natural resources ever since white folks first stole the best land from indigenous people. Even our fantastic national park system was in part built on land that was promised to free black men after the Civil War.

Pushed into secondary spaces and so-called sacrifice zones, people of color have borne and continue to bear the brunt of industrial pollution and climate change. In America, and certainly where I live in Louisiana, environmental justice is a racial issue. And because people are experts on their own experiences, it follows that despite the white makeup of Big Green organizations, the people best positioned to lead the environmental justice movement are people of color. READ MORE HERE. 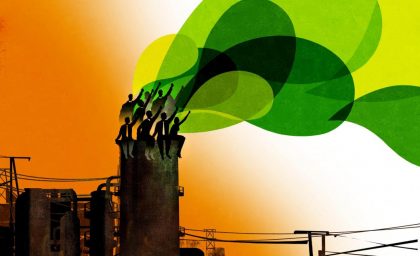